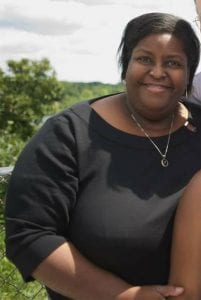 Yvette James is a native of Long Island and has been a resident of the Capital District for over 20 years. During this time, she worked in the field of advocacy for developmentally disabled individuals for approximately ten years. She changed her career direction in the early 90’s and worked with municipal government in the creation and implementation of affirmative action policies targeted for women, minorities and the local low income populace.

In 2001, she became Director of Outreach and Education with the Nutrition Consortium of New York State where one of her major roles was promoting awareness and enrollment in the national food stamp and Supplemental Nutrition for Women, Infant and Children feeding programs.

Most recently Yvette began working in the disaster preparedness and recovery arena with the American Red Cross and subsequently the Federal Emergency Management Agency. Yvette is a graduate from Russell Sage College with a Bachelors of Arts degree in Sociology with minors in Community Organization and Urban Studies. She has received her Masters of Arts degree with The Empire State College – a division of the State University of New York in June 2015.

LATEST FROM THE BLOG

A Couple of Warriors

Patient To Patient – “The Patient Navigator”

Coping & Thriving With The Challenges Of Kidney Disease